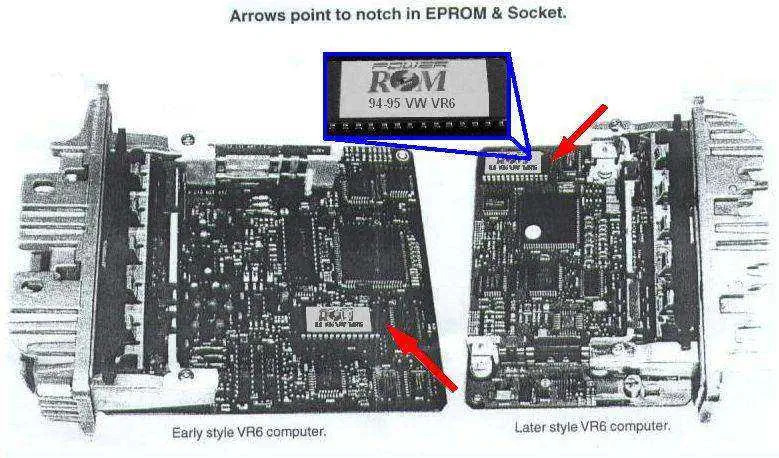 To install a performance chip on a VW Jetta, Golf or Passat models ECM from around 1995, first locate and uninstall the ECU from your car. The location of the ECM in most models is on the engine compartment, below the passenger’s side wiper assembly, as shown in the picture below: 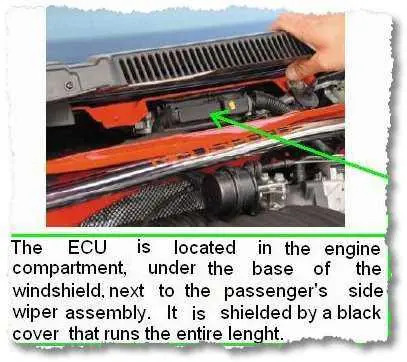 Remove the hood seal and plastic cover over that area and then release the 68-Pin harness connector by pulling the plug end lever away from the wire harness. This will release the plug so it can be removed from the ECM computer. Now remove the bolt that secures the ECM computer to the car’s chassis and slide it out. Often it is slightly tight in place, but it will come out.

Put the ECM on a bench and remove the (4) #10 Torx screws that secure the computer cover and gently slide out the heat sink and wiring terminal connector with the circuit board. Take precautions against static electricity by sitting down and grounding yourself and touching the heat sink portion of the computer to balance any differential of potential between the ECM and yourself.

Some 1994-1996 VW VR6 computers may have the EPROM chip soldered to the circuit board and will have to be desoldered and a 28-pin DIL socket installed in its place before installing the performance chip. If this is your case, you can either desolder the chip yourself if you have skills on electronics soldering or take your car computer to any TV or electronics trained technician to desolder it and solder the 28-pin socket in place.

If your EPROM chip is in a socket already, then gently pry the EPROM out from the socket with a small flat screwdriver. Lift little by little on each side until fully extracted and take note of where pin#1 goes to. (note the notch on one end of the EPROM). You must insert the performance chip in the same orientation.

When inserting the performance EPROM chip, make sure that the notch is pointing in the same direction as the old EPROM you just pulled out. Make sure that all the pins are aligned in the socket before carefully, but firmly, pushing it all the way down.

After completing the job, you may put it all back together and reinstall your ECM in your car. Plug the 68-Pin connector in, and push it until it is fully engaged. Place back the plastic cover and hood seal.

ecu solder chip 2000 JETTA CHIP INSTALL how to change the paramiters of a 2019 jetta ecm? where is the ecm on a jetta