Skip to the content
Login / Register
0 Cart $0.00
Search
Home » Blog » All » Automotive » What is Octane Rating 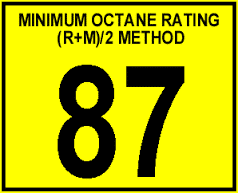 Have you ever wonder what is the Octane Rating of Gasoline?

Every time we go to a gas pump to fill our car’s tank, we always have the choice of what octane rating we wish to put in. More than a wish, there is a minimum octane rating that is allowed for your car’s engine as per the manufacturer’s specifications. We can also see a sticker on the gas station pump with the different ratings available in that station and if living in the USA, you will also see the rating calculation method used, like the commonly seen “[R+M]/2” in USA gas pumps. NOTE: USA gas pumps’ rating is also known as “AKI” rating or “Anti Knock Index”.

In the USA, the ratings are among 87, 89, 91, and 93 octane gas. Gas with higher numbers than those, is called “Racing Gas” and (1) it is not commonly seen on standard gas stations, and (2) price is considerably higher than standard octane rating gas. But, what about it???

Octane rating is a number to define the property of gasoline to resist detonation by high pressure and high-temperature conditions. It does NOT mean that 93 octane gas is way more powerful than 87 octane gas like Dynamite is way more powerful than gunpowder. Resistance to detonation means; how hard can we push or compress that gasoline in our engines (taking in account temperature) before it detonates without the spark plug firing. When gasoline ignites and goes off without the spark, it is called a detonation. It is also known as “pre-ignition”, “knocking” or “pinging”. The last one is called “pinging” because of the metallic noise it makes which sounds like a ping. The same goes for the term “knocking”.

Your car’s engine is an internal combustion engine and the “combustion” we want is a controlled and gradual explosion or deflagration, not a detonation, which is way faster and more powerful. Detonations at low engine speeds and power will sound like pinging and may cause no damage to the engine at short periods, but in the long run, it will cause the engine to fail. At high engine speeds and power, detonations may blow a piston or the engine itself. Detonations provide no usable power to the engine because it occurs too fast and provides a blow to the piston instead of a gradual push.

It is not convenient at all that gasoline fires up before it is meant to. A car engine is a complex machine with specific timing and synchronization on its moving parts and physical damage may occur if something moves when it is not meant to. Other than physical damage, a lot of problems with the performance of the engine will also occur.

Just imagine the gas/air mixture starting to ignite because of too high pressure and temperature at the compression stroke, but several degrees before reaching the “Top Dead Center” or TDC, which is where the piston stops going upwards to start moving downwards. That scenario is what produces a detonation because the piston motion pushes upwards, driven by inertia and by wheels and transmission movement, and it is still compressing the mixture in its way up. That mixture is intended to be ignited just some degrees later, but instead, it starts building pressure because it is igniting out of time. The pressure builds up incredibly fast, producing the detonation, which is like hammering the piston instead of pushing it down. The air/fuel mixture gave up to the pressure and temperature put into it and could not wait for the spark to start the ignition.

This situation produces zero power, primarily because of its short duration and secondly, because the piston was not at the position where it starts moving down. The only very short duration push that may occur from this, if any, is in backward or against the piston forward motion.

Detonations can happen from various situations or engine malfunctions, but there are a few ones that are common:

From the third above, lean mixtures are a common cause here, because the presence of excess air leads to an excess of oxygen compared to the amount of fuel in the mixture, which is ideal for detonations.

Modern cars are equipped with knock sensors, programmed to “hear” and distinguish these detonations sounds among all other engine noise. When the sensor detects a knock, the engine control module has a routine programmed in its memory to retard ignition timing several degrees in an attempt to stop detonations. As listed above, too much of ignition timing advance is a usual cause of detonations too.

Not more power then?

By what it is being covered here, you should know by now that octane is not a direct measure of gasoline power. All gasoline will have similar combustion reactions (explosive power) depending on its refining quality, additives, and cleanliness, regardless of what octane it is rated (87, 89, 91, 93, 104, etc.). The difference will be that lower rating gas (87 and 89 octane) is less quality, but less expensive too. So, being able to offer a product that consumes less from the customer’s pocket in order to make it attractive to get more buyers is why you see automotive manufacturers producing vehicles that can use low octane fuel.

There are various calculation methods, RON, MON, and PON or AKI.

RON: (Research Octane Number). Most common fuel used in Europe, Australia, and some other Countries. It is determined with measurements of fuel behavior in a variable compression engine. Results are compared with other iso-octane fuels, wish means, compared with other fuel types with an equal number of similar octane molecules present, but not of the same organic compound.

MON: (Motor Octane Number). Determined also with a variable compression engine, but with the fuel already preheated, variable ignition timing, and higher RPMs than the RON method. This method is more precise in determining fuel behavior on a loaded engine.

PON or AKI: (Pump Octane Rating or Anti-Knock Index): This is the method used in the USA and Canada, expressed as [R+M]/2, wish means RON number plus MON number, divided by 2. In other words, it is the average for both methods above.

Due to the fact that RON is always from 4 to 5 points higher of its equivalent to PON or AKI, the number conversion between USA and Europe octane ratings will approximately be as follows: